Portuguese newspaper A Bola has a story today about the sales Sporting are planning to make in the future, as the club are already expected to make a lot of money in January with the departure of Bruno Fernandes.

One of the clubs who should be boosting the Lions’ financial situation is West Bromwich Albion, who could sign Matheus Pereira on a permanent deal.

The Brazilian has been loaned out by the Lisbon side until the end of the season, and there’s a clause for the Baggies to buy him permanently for €10m.

A Bola writes that West Brom ‘should soon make this amount go to Sporting’, since they’ve already ‘decided’ they want to keep the player, following the great season he’s been having. 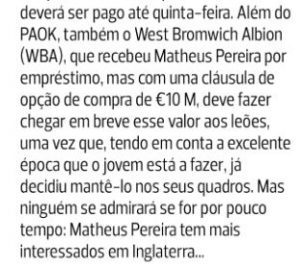 But the outlet also adds that Matheus Pereira may not stay at West Brom for much longer, because there are other English clubs who are interested in his signing.

The midfielder has impressive stats for West Brom so far, with five goals and 14 assists in 26 appearances for the club.