Arsenal and West Ham have both asked AC Milan about a move for midfielder Franck Kessie this month.

The Italian side are undergoing something of an overhaul of their squad this month, and Kessie is one of the players they’ve put on the sell list.

The Ivorian has long been linked with a move to the Premier League, and according to Corriere Dello Sport, that is where the interest is coming from.

According to the newspaper, the ‘movements’ around the player are from England and specifically Arsenal and West Ham.

They report that both clubs have had Kessie ‘in their sights’ for a while and have sent ‘important polls’ about him this month.

Corriere do not suggest what these polls were, or whether either Arsenal or West Ham are serious about a move, it just names them as interested parties. 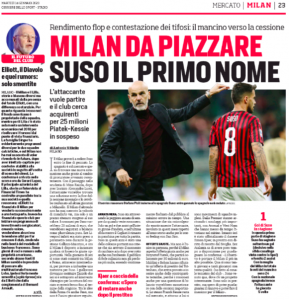 In truth, the report seems more like wishful thinking from Milan.

They could really do with the money from selling Kessie, and this feels like them praying that a Premier League side with money to burn will come along and give them the sale and price they would want.

Everton’s ‘fatal attraction’ with player could lead to negotiation – Ancelotti...

Medical done – Transfer to Newcastle should be completed in ‘next...

Man United player has ‘everything agreed’ with another club – Chief...