When footballers are linked to a move, they usually dodge all questions, maybe leaving a hint or two along the way.

Speaking to A Bola this weekend, the Rio Ave midfielder was asked if he’s leaving: “Yes, because I have received approaches and proposals from several clubs.”

The Portuguese newspaper then put it to Pele that the strongest proposal is a €10m offer from Wolves, which will be split between Rio Ave and Benfica.

Then Pele made it very clear he’s likely to sign for Wolves, there was no smoke and mirrors: “I’m going to analyse the proposals with my family and choose the one that I want the most. I’m going to travel for the week, maybe it’s the most likely outcome, but I do not close doors yet. As a child I wanted to play in the Premier League. Plus my whole family lives in London and going for it would be the icing on the cake. I only see them in holiday periods. It would be a unique opportunity to be near them.”

A Bola then asked which family, given Pele is Portuguese and it would therefore be expected his family would be in country: “My parents, my brother, cousins, uncles. They are all there, they made the decision to emigrate to London and to never return.” 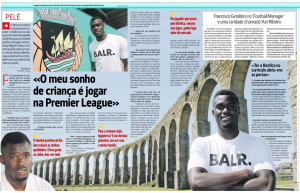 All the pieces are fitting together and Pele, who nearly signed for Wolves in 2016 only to see an injury ruin his move, looks like he’ll be in the Premier League soon.

If that’s at Wolves, then perhaps all the family can travel up from London to see Pele when he makes his debut for the club.