The English media linking Aston Villa with Moussa Marega was always going to be picked up by the Portuguese media.

Marega has been linked with half the Premier League over the past few months, and with Villa in the play-off final, it was probably their turn.

A Bola don’t credit anyone for their information, and report the Midlands club may push forward a ‘formal proposal’ to sign the player.

It’s made abundantly clear that any offer would have to be ‘very tempting’ because Marega has had a brilliant season, with his 23 league goals helping the club win the Portuguese title. 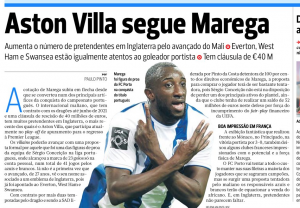 Porto have a €40m release clause on Marega, and that would probably be the initial asking price, although they’d likely accept at least €10m less.

Porto have a €50m FFP black-hole, explain A Bola, so need to sell again this summer.

But Villa’s links may be like all the others, a mix of speculation and educated guesswork.