Martin Braithwaite to Bordeaux was a transfer that no one expected, but it happened on Wednesday afternoon, and there’s mixed feelings about it in France.

Third on the Ligue 1 club’s list of desired strikers, the Denmark international doesn’t exactly fit the profile Gustavo Poyet was looking for, but it’ll do.

However, according to Sud-Ouest, it came close to never happening at all, and only the arrival of Jack Harrison convinced Middlesbrough they had enough bodies to let their £10m summer purchase leave six months after his arrival. 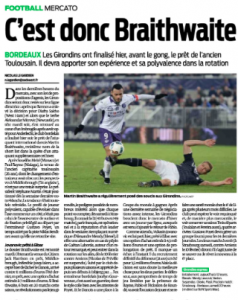 Scoring six goals in 20 games, the versatile forward didn’t exactly set the league alight at the Riverside, but he still made important contributions here and there.

That’s why, until Tuesday, Tony Pulis was against seeing him leave.

For Bordeaux, bringing in Braithwaite will allow them to relax a bit if the likes of Alexandre Mendy and Gaetan Laborde get injured, and they get a player they’ve been following since his days at Esbjerg.