Shinji Okazaki made 32 appearances for Leicester City last season and whilst he’s not a nailed on starter for Claude Puel, he’s certainly an important part of the club’s squad.

A contribution of 7 goals and 2 assists isn’t bad considering the time he spent on the pitch and it would be no surprise to see the 32 year old continue to do the same thing during the next campaign.

With another year left on his contract at the Foxes, there may even be a wish from the club or player to whack an extra season on the end of that.

But, according to El Sol, Okazaki could be off to Mexico.

The newspaper doesn’t have much on the claim, just a headline saying the player could 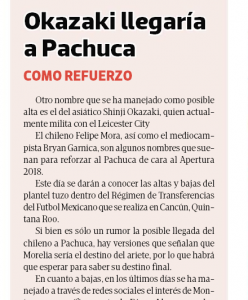 be moving to Pachuca. There’s no explanation of talks with either the Japanese international or Leicester City.

It’s a strange claim, but then it’s probably not the type of rumour a Mexican newspaper would pluck from thin air.