Corriere del Mezzogiorno is a Campania regional newspaper in Italy, that means they cover Napoli a lot and side with their local team.

But when it comes to Rui Patricio, they make it clear today that Wolves have the advantage to sign the goalkeeper.

The Premier League club are out in front and, on top of that, Napoli seem to be scared of the deal. With Patricio rescinding his Sporting contract, a process he’s running out of time to reverse, the Italian side are wary of getting into a battle with Sporting.

That sounds fair, even winning a legal challenge against Bruno de Carvalho can be exhausting, as previous football entities have found out. 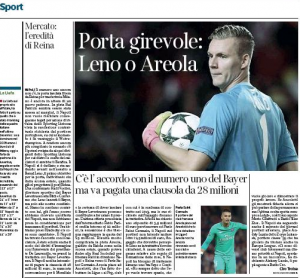 It doesn’t seem to have scared Wolves off, and the help of Jorge Mendes and Gestifute will be key. Should anyone know how to handle Bruno, if indeed that’s possible, then Mendes is a good bet.

The Corriere del Mezzogiorno claims are echoed elsewhere in Italy, with a raft of different goalkeepers now being linked to Napoli.