Home Premier League Brighton Meeting on Monday as Brighton owner in the process of buying another...
SHARE

The 48 year old’s gambling and business success is covered, and how well he’s done with the Premier League club.

Bloom is of interest to the Belgian media because he’s in the process of investing in a club there. The Brighton boss is said to have made an offer for Belgian second division side Union, and all seems to be going well.

Union need the money and HLN explain Bloom has even agreed to let current owner and president Jurgen Baatzsch stay on after any change of ownership.

The club needs saving, and whilst there’s been other interest, one offer required Union to move from their beloved Joseph Mariënstadion and relocate elsewhere, something which simply wasn’t acceptable.

A delegation from the club have visited Brighton and on returning are said to have been full of enthusiasm over Bloom’s plans for Union, so this certainly isn’t a hostile takeover. 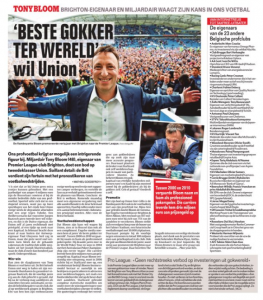 On Monday a meeting will be held to help the potential purchase go through, and they’re already dreaming at the Belgian club of a rise like Brighton have enjoyed.

From a Brighton perspective, it would potentially allow the club to loan players to Union and help their progress.

Work permit rules are more relaxed in Belgian football, and that could help Brighton with those who wouldn’t initially qualify for a UK permit.

Southampton player offered to another club via agents

Southampton player offered to another club via agents