The Spanish media continue to edge Sergio Reguilon closer to Manchester United, without it really feeling like a move is imminent.

Monday saw Marca’s editor Jose Felix Diaz put an article out saying negotiations are continuing between Real Madrid and United for the left-back. It covered the buyback clause situation, and the same is true for an article in today’s paper edition of the newspaper.

Unlike others, Marca continue to suggest that whilst Madrid want a buyback clause, the final formula of any deal could be without one. Without saying it explicitly, Marca seem to imply that United would have to pay a little more if they want a move without the clause.

Their Tuesday article says Reguilon talks are at ‘maximum intensity’ and are ‘well advanced’. The player’s agent, Kia Joorabchian, is keen on negotiating a move to Old Trafford, but there doesn’t feel a great deal more than there was on Monday.

Marca also bring Gareth Bale into the story, and it’s worth setting out the Spanish position on this. Close to Real Madrid, Diaz doesn’t even claim Bale has come into the Reguilon talks, something which would make sense if Manchester United were truly pushing for the 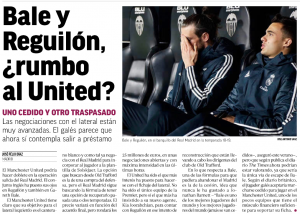 English claims are covered, and Madrid would be keen on seeing the back of Bale, however, there’s nothing fresh from a Spanish perspective.