That a new manager will be arriving at Juventus has the Italian media so excited they could burst.

There’s endless claims on who could be taking over, with Pep Guardiola, despite making it very clear he won’t be moving to Juve, even getting mentions. Mauricio Pochettino is another difficult avenue for the Serie A champions, given how hard it would be to take him away from Tottenham.

Maurizio Sarri isn’t considered to be quite such a complicated track. After an up and down season at Chelsea, which hasn’t gone badly if the end results are judged alone, there’s a suspicion both manager and club would be ready to say goodbye if they’re given the opportunity.

Sarri has subsequently had several front pages from the Italian sport media, and he gets the cover of Tuttosport on Wednesday.

He shares it with Lazio manager Simone Inzaghi, and both are seen as among the likeliest options. To get their readers excited, the Turin newspaper have shown what they feel each manager’s Juventus team would look like next season. 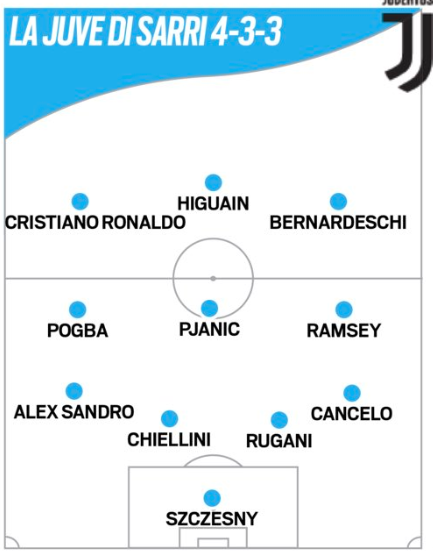 The big takeaways from the Sarri 4-3-3 selection is probably Gonzalo Higuain, currently on loan at Chelsea from Juve. Aaron Ramsey would also get in there, along with Manchester United’s Paul Pogba, as rumours about his possible Italy return continue to pop up.

Inzaghi’s team would be just as difficult to compile, with PSG’s Marquinhos, Inter’s Mauro Icardi and Lazio’s Sergej Milinković-Savić the signings for a 3-5-2 system.