Marca report in their Monday edition that Mauricio Pellegrino is encouraging Southampton to sign Zouhair Feddal from Alaves during the current window.

Pellegrino is a big fan of the 28 year old defender and signed him for Alaves last summer. Feddal had been allowed to leave Levante thanks to a relegation clause in his contract, and Pellegrino snapped the player up.

As the Southampton manager will be well aware, Feddal was in a position of strength when he moved, with Alaves getting him for nothing, and therefore managed to get a buyout clause of just €3m.

That would represent a very cheap deal for Southampton, but there’s got to be a 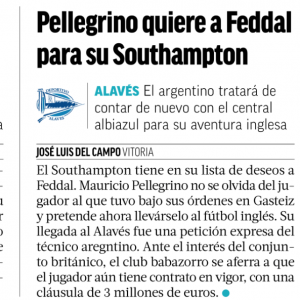 question mark over whether Feddal is Premier League quality.

He started more games than not for Alaves last season, and it was a successful campaign, but he’s had something of a journeyman career and it would be kind to judge on that season alone.

‘Should be a bestseller’ – Shirt already picked out for Man City player, transfer talked up again

‘Everything is clear’ – Club have agreement in place with Birmingham...

‘Should be a bestseller’ – Shirt already picked out for Man...

Manager on his star being ‘wooed by Liverpool’ – Says transfer...