Newcastle United had an official at the match between Sporting and Portimonense on Saturday evening, report O Jogo.

The most optimistic reason, from a Newcastle perspective, would be that they’re continuing to follow Bas Dost. Last summer the club were repeatedly linked with Dost, and there were even claims of a €40m offer going in, and being rejected by Sporting.

Interested clubs were given some hope recently when Sporting president Bruno de Carvalho fell out with most of the squad and suspended them, only to realise he needed footballers on the pitch and let them back.

It was stated Dost is ‘determined’ to leave Sporting this summer, and that his agent was travelling to Lisbon to start that process. 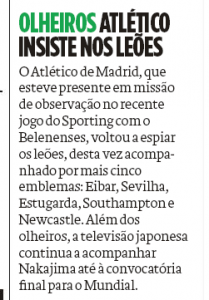 Now Newcastle United have sent someone to the Portuguese city, with a club official at the Saturday match.

Dost played, but didn’t manage to get his goal, as Sporting won the match 2-1.

Bruno Fernandes scored both of Sporting’s goals, but he’s almost certainly out of Newcastle’s range. Dost would also be expensive, although probably more achievable, with a buyout clause of €60m and a realistic price less than that.