Manchester United’s Alejandro Garnacho netted three times in the 2022 Maurice Revello Tournament for Argentina’s U20 side, and is currently the leading the tournament’s goalscoring charts.

The South American nation failed to progress to the semi-finals after suffering 6-2 defeat at the hands of France. The Red Devils forward scored a brace for his country in that tie.

Despite this, intermediary Eugenio Ascari, who deals in the South American market has positive things to say about the young Argentine squad. Ascari even went on to hail the Manchester United talent.

“Argentina is rich in talent. I am thinking first of all of Luka Romero, right winger of Lazio, taken from Mallorca,” the intermediary told Tuttosport.

“Franco is a left-back: Growing up in Lanus, he’s a very interesting [player]. Valentin is a playmaker with important technical skills and this was also seen in the last Primavera final. But the most promising is Alejandro Garnacho.” 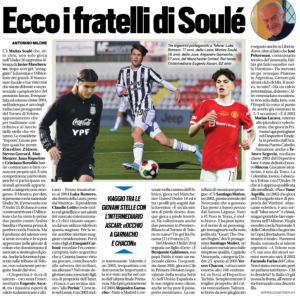 His fine performances saw him debut for the senior team in April, when he came off the bench in a 1-1 draw against Chelsea.

The attacker also made an appearance in the last game of the season against Crystal Palace.

According to Tuttosport, the Argentine talent is among the ‘most followed profiles’ by Juventus.