Catalan newspaper Sport equally love poking sticks at Real Madrid and Jose Mourinho, so when they get the opportunity to do both it won’t be missed.

Manchester United and the Spanish club are said to be in a war, with Gareth Bale and David De Gea right in the middle of it.

It of course all dates back to De Gea’s failed transfer to Real Madrid in the summer 2015 transfer window, and Florentino Perez still hasn’t got over being made to look something of a fool.

This is where Gareth Bale comes in. It’s claimed, leaning on English reports (but in truth it’s reported in Spain every week), that Mourinho wants the Welshman.

Perez is determined to be as awkward as possible with Manchester United as he feels they’ve been with him over De Gea. That’s why he’d ask them for a figure higher than €130m.

Real Madrid’s asking price is put at €130m by Sport, and if Bale goes to Old Trafford then they reckon it’ll be more. Just out of spite. 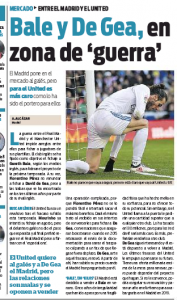 It makes zero sense, the Madrid media believe the asking price is €100m, and they also believe it would be a struggle to get that… so over €130m is ridiculous.

Sport are probably setting Madrid and Perez up for a fall.

Back to De Gea, there’s an ‘offer on the table’ for the goalkeeper to renew, but first he’d want guarantees about the ‘sporting project’ at Manchester United under Mourinho.

So do many fans, to be fair.