Wednesday’s edition of L’Equipe has a feature on France players who have contracts expiring at the end of the current season.

With the Qatar World Cup now not so far away, Didier Deschamps will want his players settled at new clubs as soon as possible, if they don’t decide to stay where they are.

Paul Pogba is one of the men in question.

With a Manchester United contract expiring at the end of the current campaign, the midfielder is now free to speak to other clubs, and even sign a pre-contract agreement ahead of a free transfer in the summer.

L’Equipe say Pogba has been ‘fluctuating’ in his opinion on whether to renew or to leave Old Trafford. According to the French newspaper, the player ‘knows’ that Rangnick ‘isn’t necessarily his biggest fan’, and they use several comments to back this stance up.

In 2017, when sporting director at RB Leipzig, Rangnick said he wouldn’t swap Naby Keita for Pogba, and whilst that was probably more aimed at hyping his own player, the comments are still being wheeled out.

Rangnick also hasn’t been falling over himself to publicly plead with the 28-year-old to stay.

When it comes to potential destinations, Juventus, Real Madrid and PSG are the clubs named, although there doesn’t appear to be anything concrete at this stage. 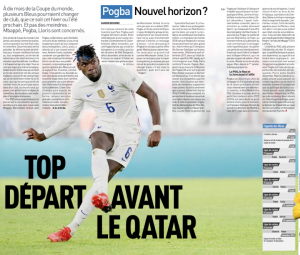 Regarding the French side, L’Equipe say the interest is ‘real’, and Pogba would be tempted too. However, there’s a worry PSG are accumulating too many stars and that could impact the dynamics for Mauricio Pochettino’s side.

In conclusion, everything remains in the air and Pogba’s future is very uncertain.