Kingsley Coman was subjected to an interest from Manchester United and Manchester City last summer.

Speaking to the German media in January, the winger admitted he’s happy at Bayern Munich amid interest shown by the two Manchester clubs.

Despite his comments, the Red Devils continue to get linked with the 24-year-old and their efforts to sign him are covered in this week’s edition of SportBild.

It’s explained the intent fromOle Gunnar Solskjaer’s side to sign the France international after this season is much ‘more concrete than is known so far’.

The Old Trafford club are serious and according to the report, they have signalled to Coman’s management the player could earn €8m net [after taxes] per season if he were to join United.

Coman’s current deal is until 2023 and earns a gross annual salary of €12m. This places him in the middle of Bayern’s salary list. 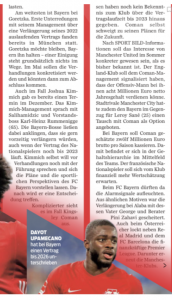 SportBild add the winger ‘expects more financial appreciation from the club’ and his desire of an improved deal is likely to trigger alarm bells at Bayern.

Coman can operate on either side of the wings, but he has been largely used on the left side of the attack. It’s the same position preferred by both Anthony Martial and Marcus Rashford at United.

If the Premier League side are serious about bringing Coman in the summer, it could spell danger for Martial, with rumours of an exit already starting to appear here and there.