Even before becoming a hero for the Bavarian club, the winger was linked to Manchester United and Manchester City.

The Red Devils wanted to strengthen their wide positions last summer, while Pep Guardiola’s side asked for the 24-year-old in exchange as a part of the Leroy Sané deal. The German left the Citizens for the Bundesliga winners last July.

Earlier reports coming out of Germany had dismissed the possibility of the France international joining either Manchester United or City.

This week’s edition of SportBild has an interview with Coman, and they ask him about the interest shown by the two Manchester clubs.

Responding to that, he said: “Knowing that good teams are interested in me is good, it gives me additional confidence. But I have a contract here until 2023, I’m just thinking of Bayern. It’s all good, I’m happy. 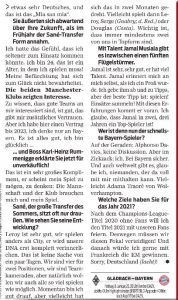 “I had the feeling that I could be used less often [due to Sané’s arrival]. I’m 24, that’s an age I have to play! Fortunately, my fear did not come true.”

Bayern chief Karl-Heinz Rummenigge has ruled out Coman’s sale and that also boosts the player’s confidence.

“That’s a very big compliment, he seems to like my game. The team and the club need me and my game,” he explained.