Catalan newspaper Sport reports that ‘like every season’ Premier League clubs are circling to sign La Masia players on the verge of turning 16 years of age.

That’s when they’re often whisked away before having signed a professional contract with Barcelona.

There used to be a lot of anger in the Barcelona media around this, but their own transfer ban served to mellow the reactions, and it’s thought the La Liga club themselves hold some blame, often not being able to show a clear route to the first team.

Manchester United get a mention from Sport, and it’s reported the Old Trafford club have identified a target.

Marc Jurado is described as being a ‘great goal’ for the English side, and he turns 16 years of age on April 13th. He’s a right winger, and it’s stated he’s become one of the ‘leaders of his generation’, so a player Barca want to keep. 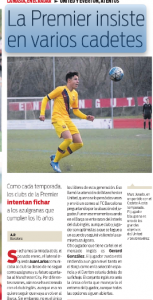 The youngster has caught Manchester United’s eye, and Sport say the club haven’t hesitated to send an email asking about the situation regarding signing the player.

Barcelona received the email directly, so it all sounds a very polite way of doing of business.

There’s confidence at Barca that a deal can be found with Jurado, and it’s also stated the player has optimism over staying where he is.