Manchester United could be presented with a chance to sign Saúl Ñíguez from Atlético Madrid this summer as a result of the Coronavirus outbreak.

AS explain that, as is the case across Europe, the virus has decimated the budget at the Spanish club.

More importantly, though, they are facing the real prospect of not qualifying for the Champions League should the Spanish FA decide to declare the season over and the current standings final.

Were that to happen, that would leave Atlético in a ‘complicated economic situation’ as they are fundamentally reliant on being in UEFA’s top club competition each year.

Should they not get that money they would be left with an ‘abyss’ to fill and selling one of their star players would be the only option. The situation would ‘force’ them to do so.

Saúl is one such player, and he is ‘sought’ by Manchester United, who could put down half of his €150m release clause to secure his signature.

That would be more than enough to fill Atlético’s coffers and get them out of the mess they find themselves in, never mind being something of a bargain for United. 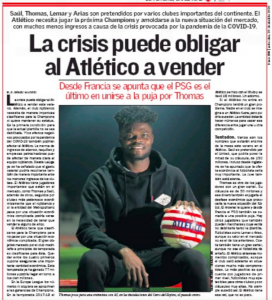 Of course, this is not the first time we’ve heard this rumour.

The same idea was posited earlier this month and then quickly dismissed, with sources at Atlético ruling out any sales.

It seems that isn’t the case, though, and perhaps this is another attempt from the club to slowly leak the idea to fans that a star man is leaving this summer.

If that’s the case, Manchester United need to be ready to move, with Juventus also keen on Saúl should he be available on the cheap.