Manchester United will have to pay €150m if they wish to sign midfielder Saúl Ñíguez from Atlético Madrid this summer.

That’s according to Marca, who have been told by sources at the Spanish club that his price ‘will not be negotiated’ this summer.

A report last week indicated that United could secure the Atlético star on a bargain deal as financial difficulties may hit the club as a result of the Coronavirus outbreak.

It was explained that, should they decide to end the La Liga season now, Atlético would miss out on Champions League football and that would cause a substantial financial hole at the club given the money associated with qualifying for Europe.

As a result, they may be forced to sell one of their star names and Saúl, who has a €150m release clause, would be at the top of that list.

Manchester United have long been linked with the Spaniard and, the belief was they could get him for as little as €70m, half of his release clause.

However, it appears that will not be the case with a source close to the club telling Marca that they have no intention of lowering that price.

It’s stated that if any team wants the midfielder, ‘they would have to pay’ the €150m release clause but that is ‘unthinkable’ in the current market. 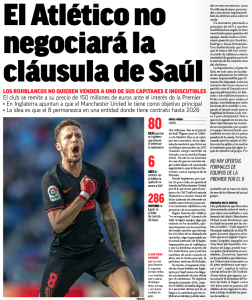 The newspaper insists that the ‘supposed interest’ from United in Saúl has never actually materialised into an offer for him, even when he was available for €70m in 2019 and Atlético were willing to discuss a deal.

The suggestion is that Manchester United’s interest has never been anything more than paper talk and, even if it were to suddenly become concrete, they would have to pay an exorbitant fee to make any move happen.