The Portuguese press is pretty glad that Diogo Dalot has finally made his debut for Manchester United, and even exaggerate a little when covering his performance today.

In a story called ‘Passion from Devils for Diogo Dalot’, newspaper Record takes all the good reactions from the player’s performance against Young Boys in the Champions League.

The outlet brings quotes from José Mourinho, Paul Pogba, Rio Ferdinand and Paul Scholes all praising the player for his good debut for the club.

Record writes that Dalot is a ‘craque‘, and “without compromising on the defence and daring in the front, the 19-year-old has left several Manchester United legends impressed and showed why the British giants transferred 22 million euros to FC Porto”.

They just warn that Dalot has some ‘heavy competition’ for the right-back spot, since Antonio Valencia should soon return from injury and is favourite to take the place. 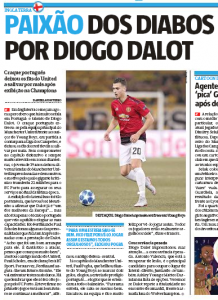 Record may be overreacting a little, but Dalot did have a solid performance on Wednesday. At first, it sounded that €22m was a lot of money for a player who only had eight appearances for Porto until this summer. But from what Dalot showed in his debut for the Red Devils, it seems that he’s ready to play at the top level.

Let’s now wait and see if he can repeat that. Record is already looking forward to it.

Wolves’ star Raul Jimenez on potential transfer fee – “They bought me for €40m, they won’t sell me for less”