Manchester United are ‘attentive’ to the future of the Atlético Madrid midfielder Thomas Lemar should he leave the club this summer.

The Frenchman has been nothing short of a flop since arriving at the Spanish club in a club-record deal two years ago.

While there have been flashes of the player that they thought they were getting, these have been few and far between, and he has regularly been linked with a move away as a result.

The Premier League has always seemed his likeliest destination, with several clubs, chief among them Arsenal, thought to be keeping an eye on him.

AS report that is very much the case but add that Manchester United are also monitoring how things develop, amid reports that his agent has already met with the Old Trafford hierarchy.

At the moment, though, it seems unlikely he will be allowed to leave Atlético.

AS explain that Diego Simeone is determined to turn him into a success and the finances of any deal simply wouldn’t make sense.

The club paid €70m for 70% of the midfielder two years ago, and since then his value has dropped dramatically, with him now valued at just €24m.

They are aware of this and know selling now would simply be bad business, mainly as the player could be used in deals elsewhere too.

That means they are resistant to a sale at this moment in time, leaving his suitors, namely Manchester United, to keep track of the situation and see if it changes in the near future. 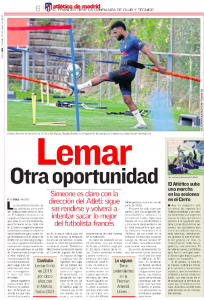 That could be the case should Atlético fail to qualify for the Champions League.

It’s been widely reported that doing so would leave them in a financial mess and facing the need to sell, and that is when the likes of Lemar could be made available.