Thomas Meunier’s contract with PSG expires at the end of June, and he’s made it clear that a renewal wouldn’t be frowned upon. However, despite the Belgian international being prepared to stay, no new contract has yet been presented.

That sees Le Parisien now looking at alternatives for the position, and Leicester City’s Ricardo Pereira is one of them.

It’s not the first time he’s been linked, and previous flirting with PSG certainly helps his case among the Ligue 1 club’s fans, but there may be an issue when it comes to finances.

Le Parisien don’t believe PSG will ‘break their piggy bank’ for a new defender, and several other options are at the lower cost end of the scale. It’s unlikely Leicester City would be ready to provide the French champions with a bargain, and that could be where the Pereira idea falls to pieces for PSG. 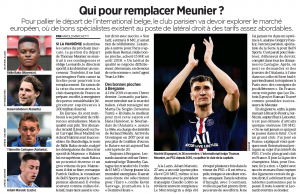 The 26 year old has a contract lasting until June 2023, meaning the Foxes are under absolutely no pressure to sell.