Home Europe From Spain: Manchester United have made £35m+ offer for player ahead of...
SHARE

On September 10th, Sport reported that Barcelona ‘moved with due diligence’ with efforts to sign Flamengo’s Lucas Paqueta.

A day later, the same publication claimed the La Liga winners continue to work with rationality to secure the attacking midfielder’s services. Having already completed the signing of Arthur from Gremio in the summer, Barcelona are after another player from Brazil.

Today’s edition of Sport also has a report about the 21-year-old, and according to the Catalan newspaper, Manchester United are the latest club to have entered the bidding war for the talented player.

He has a release clause of €50m in his contract with the South American club and it’s mentioned the Red Devils have even submitted an offer of €40m for Paqueta ahead of the next window. That works out at £35.5m and is a huge amount for Flamengo, but these claims haven’t yet been backed up in Brazil. 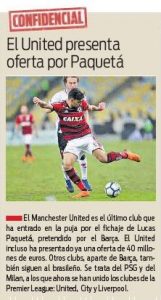 The report also mentions that apart from the Blaugrana and Manchester United, the Flamengo star is attracting interest from Paris Saint-Germain,Manchester City and Liverpool.