Monday’s edition of Sport had Flamengo midfielder Lucas Paqueta on the front page and inside there was a big story on Barcelona’s interest in signing the player.

The La Liga club were ‘working with due diligence’ on the transfer, as they look to plan their midfielder for the foreseeable future. Hoping to build a deal the way they did with Arthur, Barca obviously wanted to leave out the bit when pictures leaked of the Gremio player in their shirt.

Lucas is said to be the ‘prototype of a modern midfielder’ and Barcelona stated to have a ‘lot of interest’ in signing him.

Tuesday’s edition of the same newspaper continues the story, but now there’s a battle with PSG talked up. The French club are said to be willing to pay Lucas’ €50m termination clause, and Sport says there could be another ‘war’ lined up between the two clubs.

Flamengo are trying to get Lucas to renew and would then increase his clause to €70m, but neither this nor PSG interest is going to panic Barcelona. 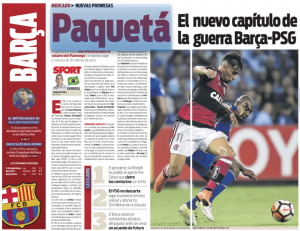 Sport explain the club will ‘work with rationality’ as they move to sign the box-to-box midfielder.

They won’t rush into a deal, and if that means he goes somewhere else then so be it.

Barcelona only want the deal if it’s good for them, and as far as Sport are concerned there’s still a good chance of that happening.

Police called to Madrid nightclub to mediate after Barcelona's Munir disputes €16k bill after 7 hours of partying with friends and family for birthday. https://t.co/ty3S9nu0m2 #fcblive