After two months of silence, the Bruno Fernandes saga is back, and Manchester United are once again being mentioned in stories about the midfielder.

Today it’s A Bola who writes about the Sporting captain, claiming that his club has found an ‘impass’ to renew his contract.

Some contacts to give him a new deal have been made with his former agent Miguel Pinho by the start of the season, but things haven’t developed since then.

Now Sporting can’t guarantee that he’s staying after the January transfer window. Fernandes continues to impress at the club with seven goals and five assists in 13 appearances this season. 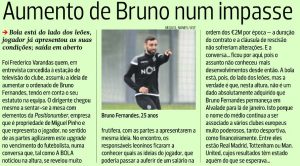 A Bola adds that the player continues to be linked to a few clubs, including Manchester United, ‘whose results have been below the expected’.

Earlier this week, it’s also been reported by A Bola that Sporting president Frederico Varandas will not drop the demands for Fernandes in January.

So those same €70-80m should be needed to sign the club captain in the winter window, and with Ole Gunnar Solskjaer’s side reportedly looking to sign a number of players in the next few months, the Portuguese midfield could be on that list.