Since Bruno Fernandes has spoken to the Italian press this week, most of the Portuguese newspapers today are highlighting the chance he has to join Inter Milan this summer.

But Jornal de Notícias is the only one who comes up with an exclusive, actually saying that Manchester United have increased their bid for the Sporting midfielder.

According to the outlet, the Red Devils now offer an initial amount of €65m, with the possibility of paying another €15m depending on performance bonuses.

Jornal de Notícias explain that by doing this, Manchester United are outbidding Tottenham Hotspur, who only offered the initial €65m.

Another thing that would favour the Old Trafford side is that they don’t need to wait for sales to pay that amount, which isn’t the case for Spurs. 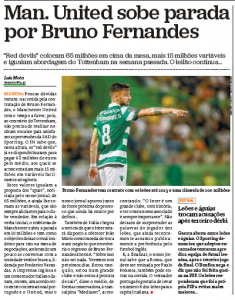 The newspaper also says that although journalists from England and Italy have yesterday reported that a deal with Manchester United is done, they rule out that information, saying there’s still a lot to be agreed.

The figures reported by Jornal de Notícias are lower, and perhaps more realistic, than those written by A Bola. Today, the Lisbon outlet insists that the Red Devils are offering €70m + €10m, while Spurs made a bid of €68m. If that was right, we have the feeling that Sporting would have already accepted United’s offer by now.