Under the Norwegian’s guidance, the Red Devils won 14 of their first 19 games and his position was made permanent in March.

The Premier League side handed their former striker a three-year contract, but reports coming out of France suggest they are monitoring another club’s manager.

According to Le10 Sport, the 20-time English champions and Barcelona ‘have eyes on’ Paris Saint-Germain’s Thomas Tuchel.

His profile doesn’t displease these two clubs and they are closely following his situation with the Ligue 1 winners. The German’s position at Parc des Princes seems ‘fragile’ as of today and his future with them beyond this campaign remains uncertain. 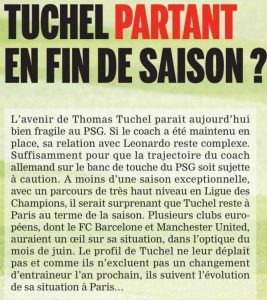 The report adds, unless PSG have an exceptional season, which includes making it to the last stages of the Champions League, Tuchel will no longer be PSG’s manager next season.

Whilst sounding a little dramatic, the claims around the manager’s position aren’t too difficult to believe given the meltdown PSG go into each time they’re knocked out of Europe’s elite competition.

Should Solskjaer help United return to the Champions League, he is likely to continue at Old Trafford next season.

Even if he misses out, if there are signs the club are building something for the future it may be considered unwise to tear everything up and start afresh again.