Aware he wasn’t going to get regular first-team football at Manchester United, with Ole Gunnar Solskjær preferring the Victor Lindelöf and Harry Maguire partnership, Chris Smalling eventually sought an exit from Old Trafford, which AS Roma jumped on when the opportunity presented itself.

Searching for an experienced centre-back, the Serie A club found their man in the England international, but three games into the season, and he has yet to make an appearance.

On the bench against Lazio, Smalling then missed the 4-2 win over Sassuolo due to ‘muscle fatigue’, but there was belief he would be ready for the Europa League game against Basaksehir.

However, Corriere dello Sport report the player has been struggling with an adductor muscle injury, and it was announced on Tuesday there would be another setback, one that is expected to see him sit out the European clash as well as Sunday’s fixture against Bologna. 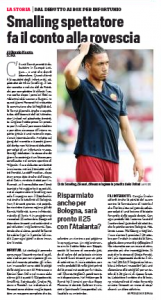 Going forward, the hope will be he is ready for the midweek game against Atalanta on September 25th, but Roma will have to wait and see how he fares in training in the foreseeable future.

Paulo Fonseca, the new manager, feels one of the reasons his side have been defensively shaky since the start of the campaign (six goals conceded in three games) has been Smalling’s absence, so in his head, the Manchester United loanee needs to be back sooner rather than later.