Home Europe Manchester United defender has been ‘offered’ to club – Could be one...
SHARE

Despite making a nice comeback against LASK in the Europa League, Eric Bailly’s future at Manchester United certainly remains uncertain.

Far from being first choice, even when fully fit, the Ivory Coast international could be on his way out this summer.

This is what Gazzetta dello Sport are suggesting on Thursday, as they claim the player was ‘offered’ to Milan, who are looking for another centre-back this summer.

However, the player currently ‘isn’t of interest’ to Stefano Pioli and co.

There’s no indication at what price or who was behind this kind proposition, but it does suggest that someone may have been put in charge of finding the former Villarreal man a new home in the coming months. 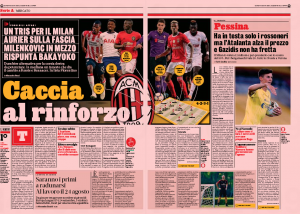 With Manchester United somewhat overloaded at the position yet still lacking the quality needed, it wouldn’t be surprising to see the amount of players addressed with sales in order to fund the purchase of a better and more experienced alternative.

Eric Bailly’s exit after four years at the club could be a by-product of this, having made just 11 appearances in all competitions this season.

Celtic make it clear they won’t accept loan – Want big fee or nothing, ‘difficult’ to imagine club meeting that