Denis Zakaria has been linked with Manchester United by a few German reports over the past week or so.

First it was Sky Germany who came with the claims, stating Ole Gunnar Solskjaer’s side ‘show great interest’ in the Borussia Monchengladbach midfielder, and that they’re considered favourites despite interest from others, including Bayern Munich.

This week’s edition of SportBild reports Manchester United and Liverpool have been ‘courting’ the midfielder, but he can ‘easily’ imagine staying where he is should his club qualify for the Champions League.

A defensive midfielder, who can play as a central defender if the need arises, the 23 year old has a contract with Gladbach lasting until June 2022. He hasn’t had a renewal since joining them from BSC Young Boys in 2017. 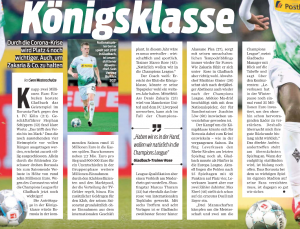 Therefore, this could all be an effort to encourage the Bundesliga club into hurrying up and putting a juicy new contract on the table.

There hasn’t been anything overly specific about Manchester United or Liverpool interest, and that’s the case again today.