After hitting double figures with goals and assists last season, Jadon Sancho was linked with a move to Manchester United in the summer window.

The Red Devils couldn’t sign the England international, who has continued to shine this campaign as he’s managed 10 goals and 11 assists in 16 league appearances.

Liverpool were dragged into the transfer mix in November as Bild reported the Reds are one of the candidates interested in the winger.

Dortmund director of football Michael Zorc admitted in September it will be difficult to keep the 18-year-old for a long time. He has now suggested the Bundesliga side could look to cash-in.

“The top priority for transfers is always to improve the squad. There is a conflict between the commitment of pillars such as Witsel or Hummels – and the transfers of talent who can develop, from which we can also benefit economically,” he told SportBild.

According to the magazine, Sancho is currently been chased by Manchester United, Liverpool and Real Madrid. 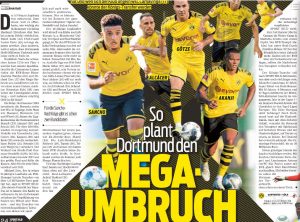 Last summer, the former Manchester City youngster doubled his salary from three to six million, but despite that, it’s not thought Dortmund will be able to retain him beyond this season.

SportBild states Sancho’s price tag is set at €150m and if United or Liverpool want to acquire his services, they must spend big in the summer.