Even though clubs are not expected to make as many big moves this summer, there are certain market situations which will force a few transfers to happen.

This is the case of Ferran Torres from Valencia. Since his contract expires in 2021 and he’s not signing an extension, the La Liga side will feel forced to sell him this year.

Marca has a story about it today, mostly covering claims from Germany saying Borussia Dortmund are going after the 20-year-old. But the Spanish outlet says that other big sides, such as Manchester United, are also going for him.

It’s claimed that in England, the Red Devils were the first to move, and are the ‘best placed’ club to sign him. Meanwhile, Liverpool are interested as well. 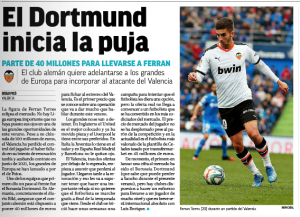 Although Torres is protected by a release clause of €100m, Valencia know they won’t get that much, and wait for the best offer.

The claims from Germany say Borussia Dortmund will bid €40m for him, so that’s where the auction should start from.

Manchester United may be keen on the player as a back-up option to Jadon Sancho.

Torres plays on the right and has six goals and seven assists so far this season.