Every season, we’re used to seeing Premier League clubs being linked to young talents from Sporting, as the Lisbon side are undoubtedly a great showcase for promising players.

Now that the Lions are on top of the table, with the real chance of winning the league after many years, there are even more eyes on their squad.

So according to newspaper Record today, Manchester United have now made an approach for Sporting’s most impressive player this season, Pedro Gonçalves, also known as Pote.

It’s said Manchester United made an informal approach for the signing, which was immediately turned down by the Lions, who want the 22-year-old to stay at least until the end of the season.

Liverpool are also credited with interest. 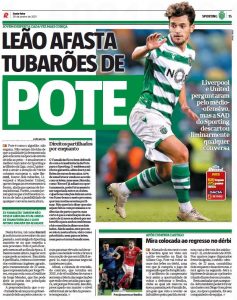 Currently the Liga NOS’ top scorer with 12 goals, there’s nobody close to him, as other players could only score seven so far.

The winger is well protected with a €60m release clause in a contract which runs until 2025. Sporting will only consider a sale in the summer, so for now, that’s the price tag he has.

Gonçalves is a flexible right-footed attacker who play in various roles. At Manchester United there’d be the real danger of him being a squad player, and therefore hindering his development.