French newspaper L’Equipe have a feature in their Thursday edition on the future of Alexandre Lacazette, a future which increasingly looks like it’s away from Lyon.

Lacazette has been linked with a Lyon exit for some time, but the longer the saga drags on, and the older Lacazette gets, he turns 26 years of age this month, the likelier it all seems.

Atletico Madrid are the most interested, explain L’Equipe, and have been making efforts to build a deal. But there’s other interest too, and Manchester United are in the picture. Lacazette is said to be on a list of ‘potential recruits’ for Jose Mourinho this summer. 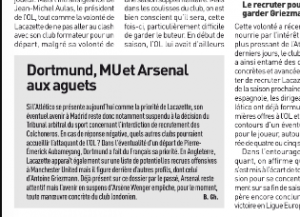 The Lyon striker isn’t top of the list, behind players including Antoine Griezmann, but the French newspaper reckon he’s on it.

Interestingly, whilst Manchester United apparently see Lacazette as an alternative to Griezmann, Atletico see him as a partner for Antoine, and a new best buddy.

Given all the players supposedly on Manchester United’s list this summer, Lacazette could have felt unfairly left out had he been excluded.

Are you a forward, who it’s vaguely conceivable Manchester United could be interested in, and haven’t been linked yet? Don’t panic, it’s early May, your turn will come.