Manchester City have informed Fortuna Düsseldorf they intend to bring Zach Steffen back to the club this summer.

The American goalkeeper is currently on loan at the German side, making 18 appearances in all competitions so far.

Despite conceding 37 goals in those games, and managing just two clean sheets, he has proven to be a firm fan favourite at the club, and they had hoped to keep him beyond the summer.

That won’t be happening, though, with Kicker reporting Manchester City intend to take him back to the Etihad in the summer.

They say City have informed Fortuna that Steffen will be returning to Manchester, with Pep Guardiola planning to ‘give up’ Claudio Bravo and instil the 24-year-old as the back up to first-choice Ederson. 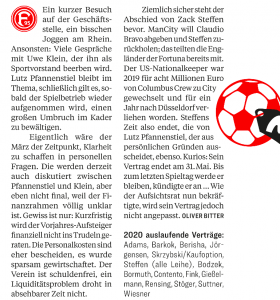 It will mark a sharp rise for Steffen who joined Manchester City from Columbus Crew in a £6m deal last summer but was immediately loaned out to Fortuna the following day.

What happens to Bravo remains to be seen, although there have been several rumours in recent months that a move to MLS may be one the cards for the veteran goalkeeper.