Watford’s Pervis Estupiñan and Manchester City’s Angeliño are potential targets for Barcelona this summer should the Spanish giants need a new left-back.

That’s according to Mundo Deportivo, who report that both players are on Barcelona’s shortlist if they end up needing to find a replacement for youngster Junior Firpo.

Firpo arrived at the Nou Camp last summer in a move from Real Betis, having emerged as one of the hottest prospects in La Liga during his time with the Seville club.

However, he has found playing time hard to come by at the club, with Jordi Alba continuing to impress as the first-choice left-back.

He has subsequently been linked with a move away this summer, mostly as part of a potential deal to bring Lautaro Martínez from Inter Milan.

Barcelona have been negotiating a deal with the Serie A side for several weeks, and the idea of including Junior has been mooted to help them bring down the price as Antonio Conte is keen to sign a new left-back.

Mundo explain that Junior’s ‘deep range profile’ fits the Italian’s style of play while a move would make sense for Barça as it would bring the cost on Martínez down and they wouldn’t lose anything on what they paid last summer.

They, therefore, are anticipating an exit and should it happen have identified several replacements who would be available for a ‘reasonable price’.

One of those is Watford’s Estupiñan, who the newspaper say is a ‘possibility’ after impressing on loan at Osasuna this season. 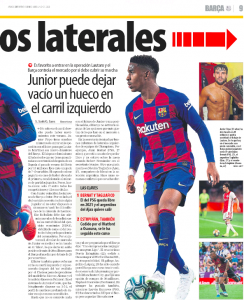 A second is Angeliño, who also finds himself out on loan from his parent club at present, having been shipped out to RB Leipzig by Manchester City in January.

He is at the German club until the end of the season and has a €30m purchase option included in his deal, although Leipzig are not keen to pay that.

He has also been ‘spied on’ by Barcelona this season, although it isn’t made clear if this was during his time at Manchester City or Leipzig.

Nonetheless, the pair are on the Spanish side’s list, which also includes the likes of Nicolas Tagliafico, Raphael Guerreiro and Layvin Kurzawa.