After repeat claims from the Italian media about Serie A interest in Chelsea’s Pedro Rodriguez, over the past week or so it’s been AS Roma pushed out ahead.

With Pedro being available on a free transfer this summer, his agents have been working to find the best solution for next season and his future beyond that.

Crucial for the Spaniard, who turns 33 years of age next month, is contract length, and a minimum of two years is what he’ll be looking for.

Italian newspapers have been growing in confidence that a move to Roma is happening, and now Spain’s Marca have backed that stance up. The newspaper’s editor Jose Felix Diax, has a small article on the back page saying Pedro is ‘very close to accepting’ a two year deal at Roma.

Perhaps even more interesting, it’s suggested he’s not all that keen on finishing the season 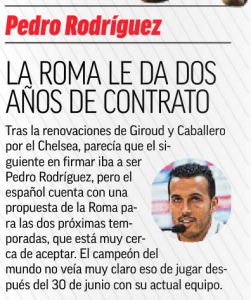 with Chelsea. Pedro’s contract expires on June 30th, and Premier League matches are expected to go on beyond that date.