City Football Group are currently in the process of buying Nancy, reports Thursday’s edition of L’Equipe.

The French newspaper explains a significant increase in TV rights for French football is likely a factor in interest in the country’s football clubs, with Nancy not the only side to have been approached by investors.

Manchester City’s owners would leave new president Jacques Rousselot in charge of Nancy for two years, and that L’Equipe know that may suggest where this information is coming from.

Those in charge of City’s club planning had been ‘studying’ the possibility of buying Nency for months, according to the claims. However, FFP is also brought into the picture. 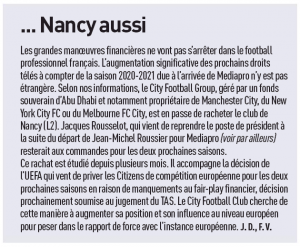 them with the balance of power in the continent’s football.

If that’s the case, it would have to be a very long term aim, with Nancy currently 14th in Ligue 2 and much closer to a relegation battle than troubling the top of the table.