On Wednesday, we covered claims from Italy that Fali Ramadani, Kalidou Koulibaly’s agent, was set to travel to Capri to present a new transfer offer for the defender.

Napoli president Aurelio De Laurentiis has rented a villa on Capri for the entire summer, as you do, and is conducting much of his club’s business from there.

The offer was to be a new one from Manchester City, and the figure was put at €65m. Koulibaly would earn €6.5m a season, almost certainly after tax, on a four year contract.

Later on Wednesday came claims the offer was actually €63m plus a few bonuses, and that it wasn’t enough for De Laurentiis.

Thursday’s La Repubblica takes a look at the situation, and they also go with the €63m figure. It’s once again stated Manchester City are ‘serious’ about the signing, but that they must please Napoli economically.

According to the report, Napoli are looking for a minimum of €70m fixed, plus more in bonuses. It’s worth noting that earlier this week, Gazzetta dello Sport spoke of a €70m potential Manchester United offer, and said that if nothing better came in then Napoli would be forced to accept it. 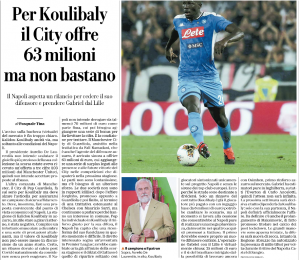 There seems to be a genuine effort from Napoli to get it out there that €70m is the new asking price for the 29 year old, with Manchester United’s name potentially being used to send that message.

If Manchester City offered that, with bonuses added or not, it’s hard to see it being rejected should nobody else come in with more.

In a difficult place financially, having spent €180m between January and July, according to the Gazzetta report, the Serie A club may even have to come down from the €70m, because it’s unlikely they’d get such a figure next year, given the defender’s age.

La Repubblica say Koulibaly ‘dreams’ of such a move to the Premier League.