Trabzonspor have been linked with a move for the 23 year old in recent days, but Fotomac report Celtic are currently ahead of the Super Lig side as they look to close in on the former Nottingham Forest winger.

Burke had a brief spell under Neil Lennon when he joined Celtic on loan during the 2019 winter transfer window. In total he played 14 league games for Celtic, scoring 4 goals.

However, with the prospect of a return to Celtic and a reunion with Lennon, a move to Turkey looks unlikely at this stage. 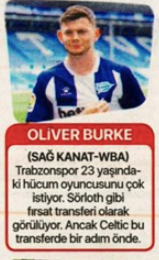 After spending last season at La Liga side Alaves, Burke returned to West Brom, but it seems he will move on again.

Burke made 31 league appearances for the Spanish side last season, scoring one goal.

His contract with West Brom will expire at the end of June 2022.