Manchester City travelling to Istanbul to hold talks about signing Cengiz Under is one of the hottest stories in today’s Turkish media.

Under’s club Medipol Basaksehir confirmed yesterday they held talks for four hours with the Premier League side, but an agreement couldn’t be found.

Fanatik have reported Under needs to wait a little longer for his move to England because the sides are unable to agree a fee.  According to the Turkish newspaper, Manchester City officials left disappointed because they believe they made a reasonable offer. 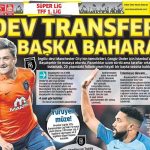 FutbolArena.Com have reported exclusively Manchester City’s offer was €9m, but Basaksehir don’t want to accept this bid because they want to come out of the deal with €10m. 30% of his transfer fee will go to his former club Altınordu, meaning Manchester City need to the offer in the region of €15m.

The website has also claimed Manchester City have offered Basaksehir a working partnership, which could involve academy players being loaned to the Turkish club from the Premier League side.

Talks are expected to continue in the coming days as both parties look to come to an agreement.