Manchester City have made enquiries for RB Leipzig star Christopher Nkunku through intermediaries, as interest in the Frenchman continues to build.

That’s according to SportBILD, who say City will have to negotiate a fee with the German club, who haven’t put a release clause in the midfielder’s contract.

The newspaper covers how several Leipzig stars currently have a release clause in their deals to protect the club, who are aware that they want to use them as a ‘springboard’ to bigger and better things.

This is something the Bundesliga side are more than comfortable with, so long as they can ensure they get paid a fair amount, hence the clauses in certain deals.

Interestingly, though, Nkunku is one of the key men who doesn’t have such an ‘escape option’ in his current deal.

He’s one of the stars of the show for Leipzig and has been shining for them domestically and in the Champions League this season, particularly in their meetings with Manchester City.

His displays have not gone unnoticed, and his entourage say that enquiries have been ‘piling up’ in recent weeks, especially from England, Italy and Spain.

Manchester City are one of those to have shown an interest and are believed to have ‘enquired’ about the player through ‘intermediaries’.

This is something that’s been mentioned before, with it reported back in September that City were showing an interest in him. 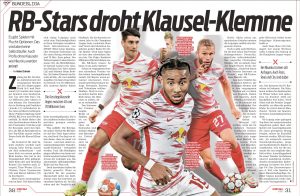 That was followed up by further claims last month, with Pep Guardiola reportedly impressed by the player’s performance when he scored a hat-trick against his side in the Champions League.

Now it seems that interest has developed into actual enquiries about his availability, albeit through the backdoor and not direct contact with Leipzig.

If they are interested, they’ll have to reach an agreement with the Germans, who can ask for as much as they like and are sure to want to make a huge profit on the £11.7m they paid back in 2019.