Home Europe Manchester City have ‘ace up their sleeve’ – Could add player in...
SHARE

It was claimed by the newspaper that Pep Guardiola’s side had recently made first contacts for the 18-year-old, who is protected by a release clause of €70m.

It turns out Record has an extra factor to add to this case, and that’s the situation of Manchester City loanee Pedro Porro.

The right-back has been having a great season at Sporting, with the Portuguese media repeatedly claiming the Lions are expected to trigger the €8.5m purchase option sooner rather than later in order to sign him permanently. 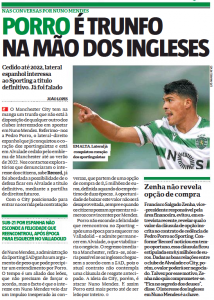 Record says Manchester City have him as an ‘ace up their sleeve’, as he can now be included in the deal for Mendes.

Sporting, on the other hand, see this as a chance of getting Porro for less, as they could find some sort of discount while Mendes goes the other way.

The newspaper also points out that time is on the Lions’ side, since they have until the summer of 2022 to trigger Porro’s clause, which is when his loan in Lisbon expires.