The Turkish club are sitting just two points behind league leaders Sivasspor after 11 games, and Fanatik claim they want to bolster their squad in the new year as they look to win the league title.

One of the players being considered by the Super Lig club is Ndiaye, and the Turkish newspaper say Trabzonspor are positive about their initial talks with the player.

The 29 year old, who’s played in Turkey for Osmanlispor and Galatasaray, is reportedly keen on a return to the country and is hoping both sides will reach an agreement soon. 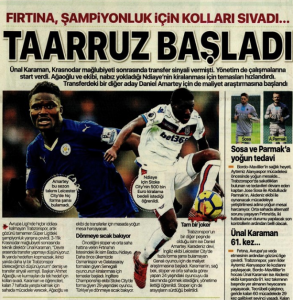 It’s also claimed Trabzonspor want to sign Ndiaye before they start their winter training camp, and their manager Unal Karaman wants the club’s board to make the midfielder a priority in the next transfer window.

Ndiaye has made nine appearances for Stoke City this season and is under contract with the Potters until June 2022.