The Serbian media are now joining the chorus of reports around Nemanja Matic’s future.

Ole Gunnar Solskjaer hasn’t relied on the midfielder as much as Jose Mourinho did, and that’s led to assumptions Matic wants to leave and will be made available for sale.

Most of the claims have been coming from Italy where it’s repeatedly been claimed Antonio Conte’s Inter Milan are interested, only for it then to be reported the club aren’t as keen as their manager.

Serbian newspaper 24Sata reports Matic is ‘dissatisfied’ with his minutes at Manchester United since Solskjaer took over, and would rather leave Old Trafford in the winter window than wait for the summer.

It’s insisted the 31 year old won’t have any issues finding a new club, as there’s widespread interest in him. 24Sata claims that all of Borussia Dortmund, Juventus, AC Milan and Inter have already shown interest. 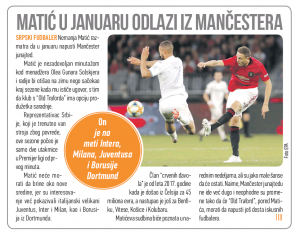 That may be a little hard to believe, especially for Juve given the options they have in midfield.

According to the report, there’s ‘very little chance he’ll remain’ at Manchester United.