The day is March 20th 2020, we are in the middle of the Covid-19 outbreak, and, for some reason, the Italian media are fixated on the idea that Olivier Giroud is a target for both Lazio and Inter.

This is now a daily rumour, with the saga starting far earlier than expected since there’s no actual football to talk about, and we can tell you confidently that it’s not going anywhere anytime soon, so strap yourselves in as this is going to be a long one.

Today, Gazzetta dello Sport give us an insight in where Inter stand regarding their pursuit of the Chelsea striker, and it’s relatively optimistic.

As things stand, the forward’s deal at Stamford Bridge is due to expire on June 30th, but with the delay in leagues ending and contractual situations up in the air, who knows what will really happen?

But, should everything end before his contract runs out, the idea would be to bring him to San Siro, where he would help with the ‘restructure’ of Antonio Conte’s attack. 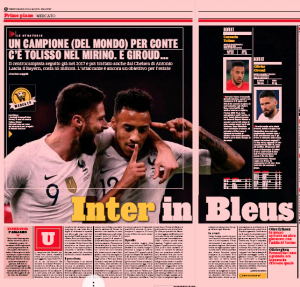 Speaking of the former Chelsea manager, Gazzetta point out another positive for Inter is the fact Giroud ‘never interrupted relations with Conte, who had sent him more than a few messages, even in January, to convince him’ to choose his club.

As you might have guessed, the striker ‘is still one of Inter’s objectives’, but that goes without saying at this point.