Turkish newspaper Turkiye claim Besiktas manager Sergen Yalcin is a big fan of Aston Villa striker Keinan Davis and that he likens him to a ‘young Emmanuel Adebayor’.

It’s reported Yalcin has been watching videos of Davis for the past couple of weeks, and he’s said to be very impressed with what he’s seen from the Aston Villa youngster.

Yalcin believes the 22 year old would be a big success at Besiktas, if they manage to sign him this summer. He also thinks that the player could play in the wide attacking areas, which would be a plus for the Black Eagles. 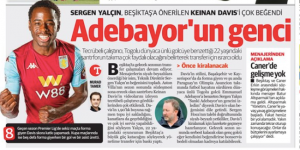 Following Yalcin’s analysis of the forward, Turkiye report Besiktas officials will now begin their operation to convince Davis over a move to the Vodafone Park.

He’ll be out of contract at the end of the month when his contract expires with Villa, unless there’s an extension to cover the rest of the season.

This season Davis has made 13 appearances for Dean Smith’s side in all competitions, scoring one goal.