According to Gunes journalist Safak Malatya, Besiktas manager Abdullah Avci is keen to sign a forward this summer to compete with Burak Yilmaz, and he claims Watford’s Stefano Okaka is the major player who fits the profile.

The Watford player is keen to leave the Premier League club after his agent confirmed that they are looking for a way out of Vicarage Road, and Malatya reports he could join the Black Eagles before the Super Lig transfer window closes next week.

Okaka has been linked with a move to Besiktas this summer but the Turkish club also reportedly have Porto’s Vincent Aboubakar as another target.

The 30 year old joined Watford from Anderlecht in 2016, however, he’s failed to establish himself as a first-team regular.

Under Javi Gracia, he was loaned out to Serie A club Udinese last season, where he scored 6 goals in 16 appearances.

Okaka is under contract with the Hornets until June 2021. 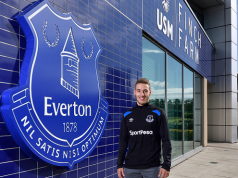 “No comparison” – Manager promises team ‘will do their best’ against...

“We weren’t in shape before international break” – Solskjaer says Man...