Besiktas winger Georges Kevin Nkoudou has spoken to the club’s official magazine and discussed his time at Tottenham Hotspur.

Last summer the French winger joined Tottenham on a permanent deal after failing to make his mark with the London club.

Speaking about Spurs as, covered by Hurriyet, Nkoudou said he struggled to adapt to the Premier League and that made a negative impact on his performances: “When I first joined Tottenham, I didn’t have a proper preseason camp.

“I stayed at the hotel for a month, I struggled to adapt. In my second season, the manager didn’t put faith in me, which is something I can understand because the team were doing well at that time.”

However, despite his struggles whilst in England the 24 year old also said that he has no regrets about the move: “I have no regrets about moving to Tottenham. Things might’ve gone better but that’s football. Looking back I can say that I’ve played for one of the best teams in England and learned lots of things.”

After joining Tottenham from Marseille in 2016, Nkoudou made only 27 appearances for the Premier League club, scoring just one goal. Most of these games came via the bench. 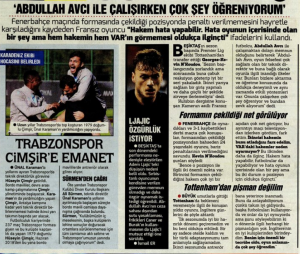 During his three seasons with Spurs the player had loan spells at Burnley and AS Monaco, but those moves weren’t a success.

The French winger joined the Black Eagles during the last window for a fee believed to be in the region of €4m.